Free Shapefiles of Countries of the World (3)


Free Shapefiles of Countries of the World (3)


This is part three of the comparison of free shapefiles of countries of the world. After feedback, new sources, blogs and tweets (thanks everyone) on my previous blogs (part 1 and part 2), I decided to show some things more.

Let's now look at the north of Italy, where several countries are situates: Italy itself, France, Switzerland, Austria, Germany, Slovenia, Croatia, and some very small countries:
And I can't really believe what I saw today. Vatican City has been moved by some shapefile creators...

With respect to Vatican City, all shapefiles that I found are wrong. Below an image created with Google Earth showing boundaries. The yellow one is Google's, so not from a shapefile. It is accurate. I really want a shapefile with Google's country borders! Didn't found it until now, even not in KML-format. All others displayed, 3, 5, 6, 7, 9 are not accurate, but acceptable. I know that Vatican City is a very small country, that on a worldscale map you could not expect too much detail, so it might make sense that they display the country border only roughly. So these are all reckoned sufficient... with respect to the requirements, see more about that below. 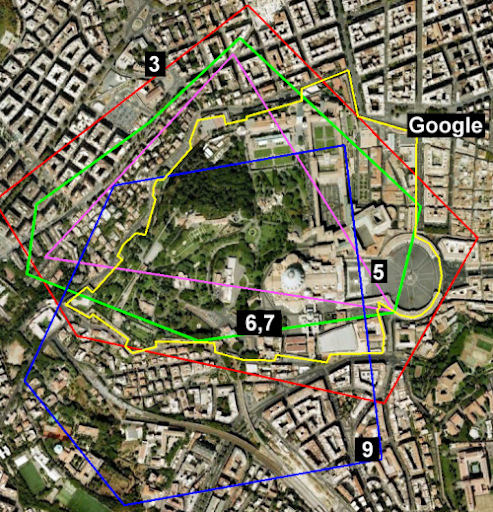 But I was really amazed by the other ones, in the zoom out below. Those (1, 2, 8, 12) are all wrong. (Remember that all numbers refer to numbered sources from previous blog, completely listed below). About 1: we already knew that it was far too rough, and it is actually understandable: it exaggarates small countries to show them on a worldscale map. Understandable. But 2, 8 and 12 are completely wrong. Especially from 12 (source:  eurostat, europa.eu) you would not expect this. What has happened here... 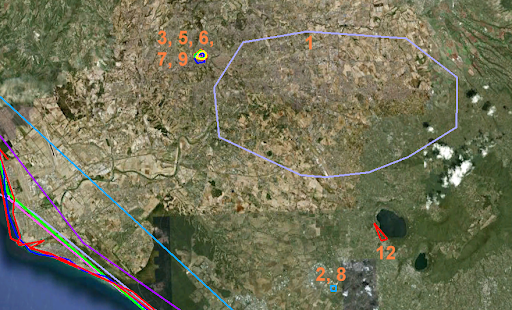 For Monaco it is a little better, in the sence that countries are not moved by 24 kilometers. But most shapefiles are more or less wrong, 12 being the only exception. 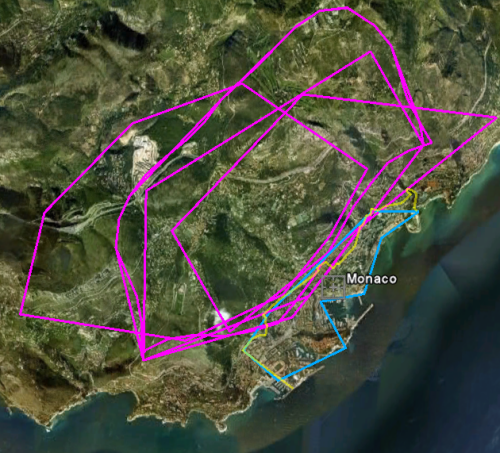 The Yellow line is Google again, and 12 is the cyan one following it. All the rest is wrong.


The other small countries, San Marino and Liechtenstein, are both displayed more or less acceptable in all but 1, 2 and 8 (all omitted in the pictures - 8 is for Liechtenstein OK). Number 12 (cyan) also here follows Google the most closely. 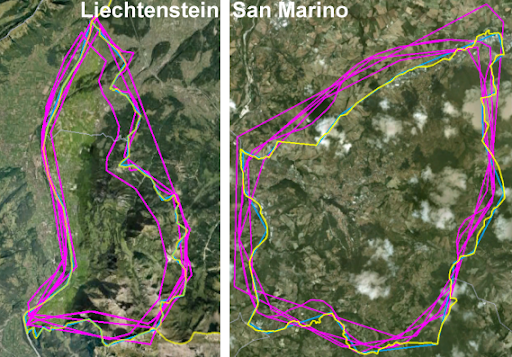 Based on this pictures, 12 (from Eurostat) is following Google's country borders the most closely, with an amazing exception being Vatican City, where it is totally wrong. The rest of the sources shows not a real winner here.

Not a country, but also compared, the island Elba is another sample where the vertices of source 12 (Eurostat) follow the borders of the island quite closely. Cyan is the 3M version, blue the 10M, darker (and paler) blue the 20M. In the 60M version Elba is omitted. I agree with this all. The other borders, magenta here below, are all worse. And I omitted 1,2 and 8 here because they are even more wrong. 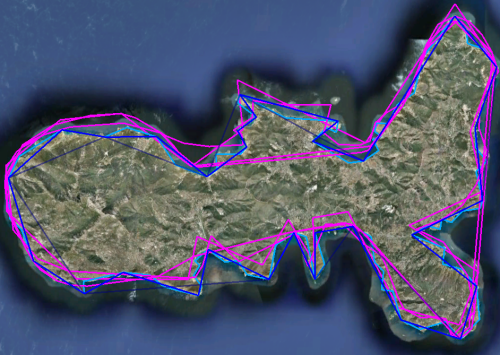 In the last two blogs I made remarks about the quality, but I didn't really listed them as formal requirements. So let's start with that now. They are composed on the fly, and maybe a bit subjective, I know that.

In the table below the requirement list is crossed against the shapefiles.


All sources compared by image

The images below show the same picture, using all shapefiles, as we did in the previous blog, but now showing these four countries, Italy, and parts of the surrounding countries.

Again thanks to commentor Alectora who suggested Eurostat, it is a nice set of four datasets in different scales. The 1:3 million version is excellent in most measures, but it is a pity that Vatican is displaced and the IJsselmeer in the Netherlands is omitted. And that some polygons are not valid...

I still think a good and free shapefile of the world is still welcome.